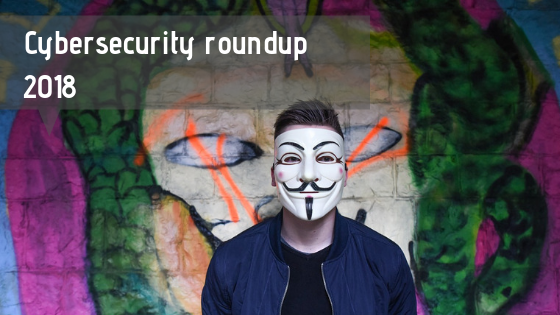 In almost a blink of the eye, the year will be over. In cybersecurity terms though, 2018 could probably be defined as “business as usual”. Cyber threats only increased, there were news of even more daring attacks and cyber breaches with more companies waking up to the catastrophic damage the lack of a cybersecurity framework can cause. In a nutshell, these were some of the most significant cyberattacks and trends of 2018:

Possibly the biggest data breach of the year, considering the sheer scale, size and reputation of the brand involved. It would probably be fair to say that Facebook is one of the most influential companies in the world today so there was a shock in September when news emerged that an attack on its computer had exposed the personal information of nearly 50 million users.

This was the largest security breach in the company’s 14-year-old history. Coming on the heels of the Cambridge Analytica scandal earlier in the year (more on that in the next point), this breach made a big hit on Mark Zuckerberg, Facebook, and social media companies, in general. The flaws in Facebook’s security systems were so severe that hackers were even able to hack into the user accounts of Facebook founder Zuckerberg and top executive Sheryl Sandberg, in a major embarrassment for the company.

Facebook’s troubles had emerged earlier in the year, in March, when the news erupted of the Cambridge Analytica scandal. According to investigations made by the American and the British media, Cambridge Analytica stole personal information from 50 million Facebook user profiles. This was done by getting users to submit answers to a personality prediction application by a psychologist from the University of Cambridge Aleksandr Kogan. This application needed users to login using their Facebook account and gained access to their profiles, locations, likes, and other personal data. It also gathered data on the friends of the users who downloaded the application.

This data was then sent to Cambridge Analytica – which is a violation of Facebook’s terms of service – which created psychographic profiles on 30 million of these profiles, to influence voter behavior for its clients. This news caused a huge uproar over the world with Facebook being investigated by authorities of several countries and many angry users even starting a #DeleteFacebook campaign.

An attack which really illustrated the frightening consequence of a hacking attack to banks in India, Pune’s Cosmos Bank was siphoned off of Rs 94 crore through a malware attack on their servers. These attacks happened in August and involved cloning of thousands of the bank’s debit cards through two days. The bank had to close its ATMs, operations and suspended net banking & mobile facilities. North Korean hackers were linked to the attack and the bank only managed to start its ATMs at the end of September, almost a full month after the attack.

As one of the oldest and most well-known airlines of the world, there was a sense of concern when British Airways announced that 380,000 card payments on its website were compromised during a 15-day period between August 21st and September 5th. Details like name, email address, credit card information like the number, expiration date, and CVV code were stolen. While it did not affect flight operations, it caused several anxieties and concerns for customers who had booked flights in the intervening period.

While not an attack or threat, the implementation of the General Data Protection Regulation (GDPR) in the European Union was one of the biggest events of the year from a cybersecurity perspective. May 25th, 2018 was the date on which GDPR finally came into existence. A high-profile and wide-ranging piece of legislation, the GDPR has updated the rules and regulations around data privacy for EU citizens in a world where this topic is getting increasingly important. The territorial scope has increased, stiffer penalties have been defined and conditions for data consent have also been formulated, leaving organizations to scramble and ensure that they are complying with the regulations.

As we can see, it has been an eventful year for enterprises ranging across all sectors. It is important to secure your cybersecurity defense and Seqrite’s range of solutions provides powerful protection to keep your enterprise safe.